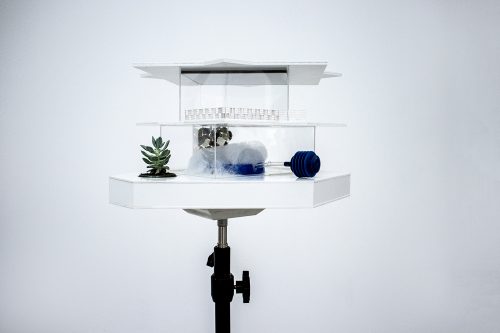 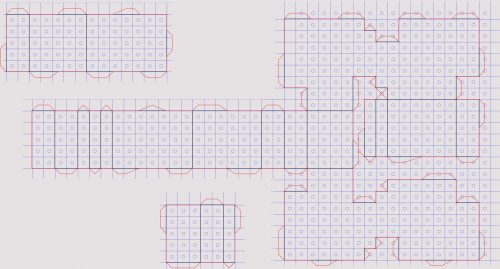 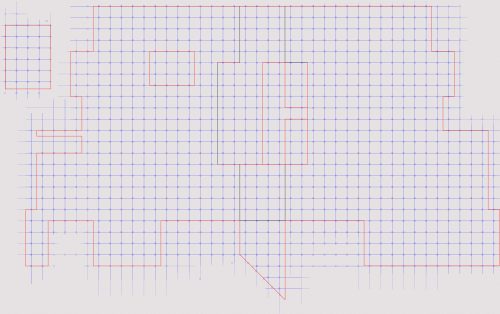 tiles1 From a series of fragmentary works and speculative research on feminist spatial utopias: The acryl glass object is a model and a mechanism at the same time; it portrays the Self-Cleaning House (Frances Gabe, 1984) and provides a tool to douche itself. The drawings show two completely (inside and outside) tiled houses unfolded, as well as a pattern of a zeppelin.

The original self-cleaning house that the American inventor also inhabited, implies questions about the role of technology in dismantling patriarchic formations, not so much as it aims at liberating the (female) homeworker, but rather as it gives an idea of women’s role in technological development. Contradicting the assumed rational and objective male space that integrates technology with prevailing structures of power, Frances Gabe’s house was a space where she felt safe and assured to engineer, learn, and experiment.
The project by Frances Gabe is a patented invention (patent number: 4428085) that consists of sixty-eight appliances to make the house clean and dry itself. By pressing a button, sprinklers in the ceiling of each room are activated, to clean the room with detergent and water followed by hot air drying. The building construction does not only clean the house but also clothes, dishes and even the dog house. The “giant dishwasher”, eliminates (mainly) women’s reproductive labor and unpaid housework, in a completing of the Frankfurt kitchen concept.

50 Years after 50 Years of the Bauhaus
Württembergischer Kunstverein Stuttgart
May 4—September 23, 2018